We sell a wide range of IR illuminators which complement any full spectrum device, allowing stills and movies to be taken in complete darkness.  The effective range of illuminators can vary depending on several factors including your device, the type of illuminator used, the conditions and whether you are indoors or outdoors.  When indoors, the range of an illuminator in small to medium sized rooms will bounce of surfaces and increase its effectivity.  To give you a good idea of how our illuminators perform, we have paired one of our Full Spectrum Modified camcorders with two types of illuminator to capture this footage outdoors.  Watch the movies below…

During February 2020 we sent out several prototype trials of our new radar movement detecting X-Pod. Amongst the first successful field trails was feedback from Danny Moss or the Haunted Hunts. the following movie clip was filmed at Tatton Hall on 14.02.20.

Thanks to Danny for sharing this footage with us.

For an opportunity to test our future prototype ghost hunting equipment, please keep an eye on our news of upcoming release on our YouTube Channel.

In return for testing our prototypes, all we ask for is a video such as that Danny has provided below giving an honest review of the product.

Thanks for reading, don’t forget to visit our YouTube channel, watch the video below and Subscribe to stay posted about our future paranormal gadgets and prototypes..

You’ve possibly seen our tutorial video showing you how to add sound to your KII meter. Its a tricky but easy enough mod to add a chirping noise to one of the most well known pieces of equipment used for ghost hunting and seeking out EMF.

Importing all of KII meters directly from KII Enterprises means that we only stock genuine KII devices and are only one of two companies within the UK that do. The majority of KII meters found on Ebay are a fraction of the cost but unfortunately fake! Another benefit of buying our KII meters directly from KII is that all of our latest stock of K-II meters have the latest S2a Revision Printed Circuit Boards inside. Due to the smaller size of components used on the new style boards, there is a little more room left inside the device of which Infraready have taken full opportunity to squeeze in some additional circuitry and have released two new modded KII meters to the paranormal field for testing throughout February 2020.

Movie clips of the new mods can be seen at the bottom of the page and assuming that all tests go well will be available at infraready.co.uk on 1st March 2020

The international team of paranormal experts meet up with the owners of various haunted house, during which several of our devices were used.

The series, created by Zak Bagans, can be seen on the Really channel.

The Infraready REM TEMP being used by Barri Ghai

Our very own Infraready Spirit Portal alongside Chris, Barri and Jayne.

All of these devices can be found online at our ghost hunting store, https://infraready.co.uk

We are proud to have supported such a well established show and hope to extend our support further in coming series in both the UK and US.

The Ghostfinder Paranormal Society…… Infraready Ghost Hunting Equipment were delighted to provide https://www.ghostfinder.co.uk/
with one our custom built devices.

Since 2006 The Ghostfinder Paranormal Society has investigated thousands of allegedly haunted properties across the United Kingdom and uncovered real evidence of the paranormal.

Mark Williams sent a request asking if we could build a REM with temperature display.  Within an hour we had built a prototype for testing which can be seen being held by Barri Ghai and Ash Buckenham.

If you’re a fan of Ghost Hunting Programs in the UK, you may well recognise Barri and Ash.

Ash has starred as one of the lead investigators and tech wizard on channel MY5 Celebrity Ghost Hunt alongside Rylan and as the name suggests a host of other Celebs from the UK.

Barri Ghai founded the Ghostfinder Paranormal Society in early 2006 with the intention of helping more people understand and find answers to the paranormal by attempting to gather tangible evidence.

Barri Ghai is currently presenting a brand new TV show on Really Channel called Help! My House is Haunted. The 12 episode show airs on Friday nights at 10pm ad stars world renowned psychic medium Chris Fleming, and French paranormal investigator Sandy Lakdar. The series has been produced by the creator and Executive Producer of Ghost Adventures, Zak Bagans. All previous episodes can be seen on catch up via the UKTV Play App.

Infraready are hoping to build a strong bond with the GPS team, partnering with them to trial our prototypes out in the field before they are offered for sale on our website.  Watch this space throughout 2019 and be sure to follow the GPS team, Barri and Ash on their adventures throughout the year ahead.

Our Full Range of Ghost Hunting Equipment Can Be Found Online at https://infraready.co.uk/home/

Nikon P1000 Full Spectrum Converted Camera. UFO and Skywatching fanatics, Ghost Hunters and Paranormal Investigators will be pleased to hear that Infraready have converted the Nikon P1000 just months after its realease.

The P1000 is equipped with an Ultra Zoom, currently the longest in the world exceeding the performance of its predecessor the P900 by a mile.  The 125x Zoom, thats 24-3000mm in terms of 35mm Cameras!

Here is a taster of the camera….

The ultra-high-definition (approx. 2,360k-dot) electronic viewfinder gives a clear, detailed view of your shot even in bright conditions. And the bright 3.2-in 921k-dot LCD monitor can be tilted and twisted in almost any direction. An eye sensor automatically switches from monitor shooting to viewfinder shooting the instant you raise the camera to your face.

This camera’s generous grip ensures a stable hold and the side zoom control lets you extend the lens with your thumb. A simple press of the snap-back zoom button will retract the lens to a wider angle, making it easy to pick up subjects that have moved out of shot. This COOLPIX is also less than a quarter of the weight of an SLR camera with super-telephoto lens attached. Weighing just 1.4 kg, it’s much easier to manage when shooting handheld.

Soul Reaper Paranormal are an experienced group of friends, investigators and paranormal researchers that love to operate at a professional level but also love to be themselves.  Soul Reaper believe this is one of the most important factors of their team.

Infraready and Soul Reaper Paranormal Have an Established Relationship, Supporting One Another In The paranormal Community.

END_OF_DOCUMENT_TOKEN_TO_BE_REPLACED

Being offered the opportunity to suppport such a fantastic show as Celebrity Ghost Hunt was amazing! Rich Merritt (Production Director / Goo Wood Media) and Ashley Buckenham (Presenter / The Ghost Finder Paranormal Society) engaged in conversation over what equipment would be suited to the environments and locations they were set to visit. END_OF_DOCUMENT_TOKEN_TO_BE_REPLACED

Hideen Realm. We are a paranormal team from Yorkshire, England who are intent on finding the answer to one of life’s greatest mysteries; what happens to us when we die? We do this through investigative research and experiments with an emphasis on more scientific based methods.

END_OF_DOCUMENT_TOKEN_TO_BE_REPLACED 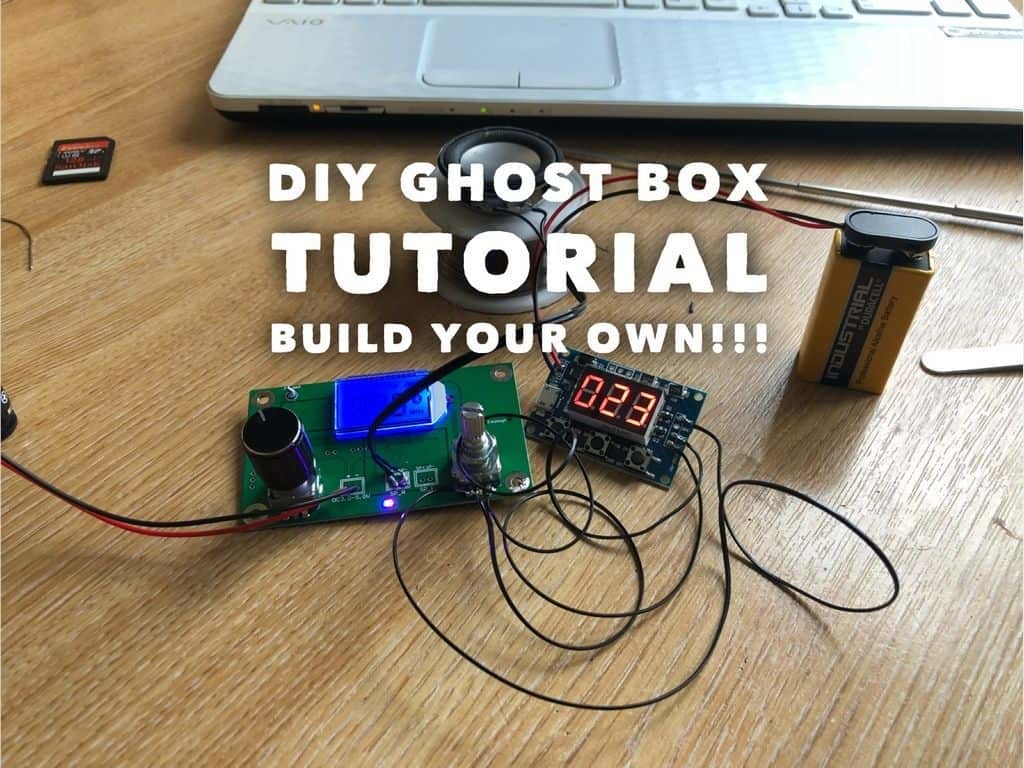 In this demo we will show you how to build a simple yet effective sweep radio.

If you would like to buy the components in kit form they can be found the Spirit Box section of our shop at https://Infraready.co.uk

The youtube movie above shows how to connect the circuitry and operate the sweep direction and rate.

This provides a great solution for ghost hunting and paranormal investigation, a very effective FM sweep radio that can

easily be accommodated into a small project box or even an antique radio.

We also sell reverb circuits and amplfiers should you wish to create your own spirit portal.